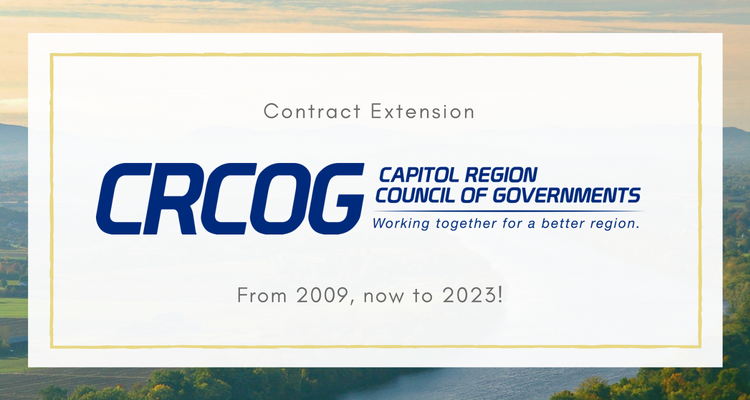 ViewPoint Government Solutions is thrilled to announce that the Capitol Region Council of Governments (CRCOG) in Hartford, Connecticut has signed a contract extension with ViewPoint through 2023. With this agreement CRCOG will continue to offer Connecticut municipalities streamlined procurement of ViewPoint Cloud, the company’s cloud-based permitting, licensing, and code enforcement software. Originally signed in 2009, the extension will usher in almost 15 years of continuous service to Connecticut communities.

The regional approach to procurement has allowed participating communities to maximize operational benefits, cost savings, and constituent satisfaction. CRCOG’s Online Permitting Program launched in 2009 after the organization received a state grant to undertake a regional IT project, and several members identified ePermitting as a priority that could bring substantial change to their communities. Through an in-depth Request for Proposal process, ViewPoint was selected for it’s online functionality and user-friendly interface.

CRCOG Program Manager Brian Luther acts as an educator and communicator for municipalities, and explains how the biggest impact from implementing ViewPoint Cloud has been an improved customer service standard within building departments.

“The convenience factor for contractors with online permitting is almost necessary, and there’s huge incentive to do it. Imagine being a contractor with businesses all over Connecticut, and every time you have to pull a permit for an individual job someone has to drive out to the town’s office,” Luther details. “If you have an opportunity to go to a town that doesn’t have online permitting, that could be the deal breaker. Towns want to limit that barrier to development.”

Although originating with communities in CRCOG’s Hartford region, the agreement between CRCOG and ViewPoint was crafted to allow all Connecticut municipalities to participate. Almost 10 years later, the Online Permitting Program is one of CRCOG’s most well-known and in-demand services. Growing numbers of Connecticut municipalities are signing on, joining 28 cities and towns already using ViewPoint permitting software through the partnership.

In contrast to notoriously cumbersome and expensive IT projects, ViewPoint Cloud implementation has also been an area of measurable success and sets a new precedent for forward-thinking local governments seeking the best technology solutions. Providing streamlined procurement and support resources, the project is an exemplary model for local, regional, and state cost-sharing and collaboration. Paired with ViewPoint’s agile approach to implementation, Bloomfield, CT, for example, was able to implement ViewPoint Cloud internally, without a dedicated IT staff member or consultants.

The program has also seen product growth as ViewPoint Cloud was phased into the ongoing Permitting Program after the product’s launch in 2013. This long-standing partnership has meant these municipalities can rely on the same company, people, and program, year after year, while continually being upgraded to the newest modern platform. ViewPoint maintains a collaborative relationship with it’s municipal customers, supporting these transitions and actively soliciting feedback through events like a recent Connecticut Customer Meetup hosted by CRCOG in February.

“ViewPoint hosts a user group meeting every year, which has been a great way to stay in touch and actively get feedback, instead of just reacting,” explains Luther. “Especially with building inspectors, you don’t have a lot of meetings or opportunities to feel heard and that’s really appreciated on their end.”

Customer meetups have proven an important opportunity to develop that two-way relationship with users, whose ideas and feedback directly shape the development of the product.

Presenting at this year’s Connecticut meetup, ViewPoint CTO Alex Pajusi reflects, “Our team works hard every day to help improve the way government works, and one of the best ways we can do that is by hearing from the people using the software every day. It was especially valuable to host the event with CRCOG, knowing we have a home base in the state helping to cultivate this mindset of modern government technology. ”

Breaking down barriers to innovation and making sure that communities of all sizes have access to modern technology platforms is a key value driving the partnership between CRCOG and ViewPoint. These partners look forward to another five years of this successful Online Permitting Program and hope to serve as model a for modern government technology collaborations for communities around the nation.