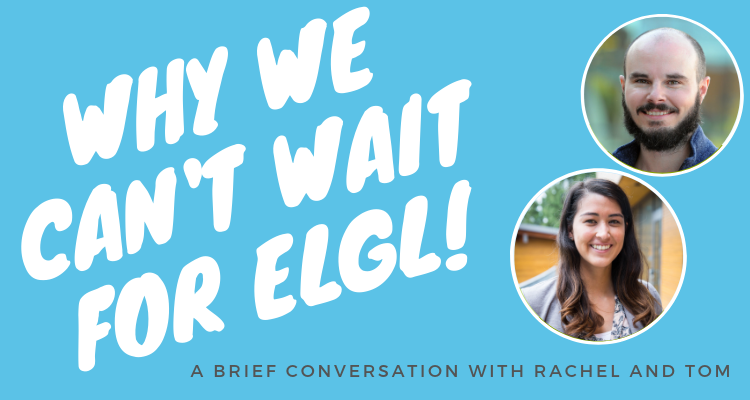 The ViewPoint Cloud office has been ablaze with excitement as we near #ELGL19. For this year’s conference, we’re sending a first-time attendee, Tom Crosby, and we thought it would be fun to have him sit down with our resident ELGL veteran, Rachel Keyser, to chat about the upcoming event.

They talked about ELGL’s unifying mission to do good, creating culture through diverse voices, and a commitment to breaking down barriers between public and private sectors. Unsurprisingly, a few Parks and Recreation references may have come up too.

Rachel: So Tom, I’m really happy to be chatting with you today in the lead up to ELGL. Knowing the kind of person you are, I’ve been excited for you attend this year.

Rachel: I will say that you’re one of the most excitable people I know, so that statement is unsurprising. But the feeling is well placed!

Tom: [Laughs] Well there’s a lot to be excited about.

Rachel: One thing I love is that ELGL does a great job of playing with pop culture, incorporating fun themes like Parks and Rec. So I wanted to start by asking: if you lived in Pawnee, IN and were part of the Parks and Rec crew, who would you be and why?

Tom: I’m going to have to say Ron Swanson here. Many of his traits are how I want to be in the world. I envy his ability to not care about what others think of him.

Rachel: So it’s kind of an aspirational pick?

Tom: Yeah! I feel like someday I want to get on Ron’s level. Not to a fault—I’d never stop showering or say ‘don’t talk to me’—but I like how he can control situations with his confidence.

And a funny story actually, back when I first started at ViewPoint Cloud, I had a lot of ideas about how to be more organic in my communications. Much like ELGL, I thought GIFs would be a fun idea and Ron Swanson was the only permitting-related GIF I could find.

I think it kind of captures Ron Swanson in a nutshell.

Rachel: It does! Having seen ELGL’s online presence, what has been your impression of the organization so far?

Tom: My first exposure to ELGL was actually at ICMA 2016 in San Antonio at their Civic Pride mixer. I was still getting my bearings at that point and what really impressed me about ELGL was that they made me feel comfortable immediately.

I felt like ELGL was this welcoming beacon, breaking down those walls between the private sector and governments. The organization does a great job of reminding us that, at the end of the day, we’re all just humans, and there’s common ground when we’re all working to make society better.

Rachel: I couldn’t have said it better, and I’ve had the same experience. In comparison to the dozens of conferences we attend, ELGL stands out by seamlessly fostering connections across traditional barriers. Everyone that is part of the community is assumed to be there because they care about improving our local governments and our society as a whole.

There’s a strong mission-based foundation that runs through the blood of the organization, and I think it not only draws particular types of members, but more progressive vendors and nonprofit partners. I haven’t really seen that anywhere else.

Tom: I also love how ELGL goes out of their way to highlight the positive work that’s going on—they don’t just focus on problems. Their awards highlighting trendsetters makes it feel more like a community. Their podcast always has interesting interviews, and they’re just great content creators. That has a real, genuine effect.

Rachel: That’s actually how we first got involved. I ran into their blog content, emailed Kirsten asking if we could contribute something, and she was super open to it. Because they source content across the membership body, it also democratizes and diversifies the culture.

ELGL is one of the few organizations we’ve found that doesn’t just talk about innovation, but really expresses a culture that speaks to younger and more progressive folks, and makes them feel like they belong. They bring a lot of important principles and values to the forefront of conversation.

Rachel: What are you most looking forward to at the conference itself?

Tom: I know there will be a lot to learn and explore, so it’s hard to pick one specific thing. I feel like I’m most excited to just connect with people. Going to an event where a lot of pretense is already broken, it allows for these connections to occur authentically.

Rachel: I think you’re going to be pleasantly surprised by how open, curious, and inspiring this crowd is. Not to mention they’re a ton of fun. I’m jealous and wish I were going with you guys!

Tom: We’ll miss having you there too! Okay, last question for you before we wrap this up. How do you think ELGL uniquely attracts this crowd, and what stands out to you about ELGL members?

Rachel: This group of people wants to do good work and live good lives, and I think ELGL represents those goals and values. People that are attracted to that are naturally attracted to the organization. People like us too—we started working with ELGL because we recognized their audience as great people to partner with. They have positive energy, they’re trying to build things. They’re not afraid of changes or new ideas, but instead actively seek them out.

Tom: So you’re saying I was right on track with my Ron Swanson GIF?