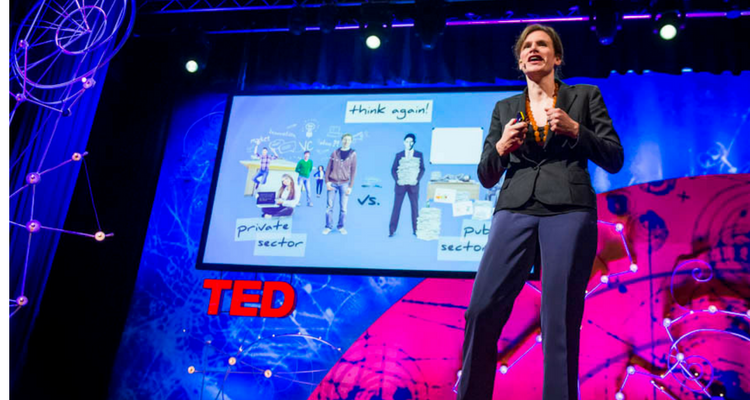 If you need a little inspiration for your day, take a scroll through these 5 TED speakers and see how they are changing government innovation—and the world—through technology. If you don’t have time to watch, here are the highlights:

Myth: The private sector innovates while the public sector gets in the way. The reality is that government has often been at the head of research and funding for important technological advances. The growing industry of government technology is continuing to push envelopes, challenge long-held stereotypes, and change the culture in and around government. Public-private partnerships will continue to be crucial in advancing society.

Hands are more important than voices, says Code for America founder Jennifer Phalka. Several of the speakers echo this sentiment, as they explain the inspirational work that’s getting done because people have decided to care enough about their society to care about government. Progress is evolving from a culture of blame & apathy toward government to one of ownership. Click To Tweet

Technology can transform our institutions and spaces. From open sourcing data to autonomous cars, technology is changing our frameworks for government and for living. The tools are there, and if we can take advantage of them we will be able to tackle the biggest problems facing societies.

Economist Mariana Mazzucato explains her controversial thesis that government is a crucial driver of innovation and economic growth. She challenges the classic rhetoric that the private sector is always pushing forward societal innovation, emphasizing the importance of our language in shaping perception and reality. Mazzucato argues that government not only fixes markets but shapes them, creating tremendous value by making large, long-term investments in research and development. She cites revolutionary pharmaceutical drugs and much of the technology currently used in smartphones as examples of government-led innovation. She then asks, where is the reward for the state?

Her vision: Inclusive economic growth where governments maintain equity in their investments and reinvest the benefits into public goods.

Code for America founder, Jennifer Phalka, makes an old argument in an engaging way: When we conflate government with politics and demonize bureaucracy, we disempower ourselves. We have to engage in the machine of government and make bureaucracy sexy. Phalka describes Code for America (young designers and techies who commit a paid year of service to government) as one example of partnerships that efficiently leverage talent for public good. She reminds us why government is the heart of society, and why improving government means improving citizenship. “Technology makes it possible to fundamentally reimagine the framework of government in a way that can scale by strengthening civil society,” says Phalka. We are now used to having a voice through technology and social media, but we can use open, generative platforms to promote collective action.

Her final message: let’s stop talking and get to work.

3. Haley Van Dyck: “How a startup in the White House is changing business as usual”

As a part of the tech and startup communities, Haley Van Dyck calls herself a disrupter. She helped found U.S. Digital Service, a network of startups with top tech industry talent looking to bring world-class digital services to government. Van Dyck hits us with some staggering statistics—the U.S. Federal government spends $86 billion annually on IT, and 40% of their projects never see the light of day. Through initiatives like U.S. Digital Service, government technology is disrupting this status quo by bringing talent, innovation, and hope to the public sector. “It’s about taking complicated processes and making them more human,” she says. “What if applying for Veteran’s services were as easy as ordering cat food?” But it’s not just about convenience; improving digital services increases equity. The results are already evident in a streamlined immigration application process, reorganized Veterans’ benefits website, and an intuitive practice civics testing platform.

As head of the White House Open Government Initiative, Beth Noveck knows what it means to be an innovator in government. She also knows that the age of big data and social networks means the opportunity to reshape our institutions. Open government is about sharing information so people can build on top of it, so we can facilitate collaboration through public-private partnerships, and so that individuals share their values through more than voting. Local governments and app makers are already making this happen all over the world, and its spreading exponentially. Noveck makes it clear that transparency is not the goal here, it’s collaboration. Technology can help 1) the public provide information to the government so they can make better decisions, and 2) governments give decision-making power back to the public.

Her vision: for people to know that we live not only in a readable, but also writeable society.

As an architectural researcher at MIT, Ken Larson is at the forefront of cutting edge technology, and he’s using this power to think about how we can make better cities. With over half of the world’s population and counting, cities are the foundation of civilization and we have to figure out how to make them more livable. Larson argues that technology has shaped how we interact with spaces, from the industrial revolution to present day. With better technologically, we can more intentionally design our spaces to suit the needs of growing, densified cities. Autonomous vehicles that can talk to pedestrians and robotic in-home architecture are just a couple of the awesome advances shifting the paradigm around how we choose to live together.

His final message: Cities are about people. New models of moving, living, and working should be designed with this in mind.

Jason Reynar is the Chief Administrative Officer of the Town of Innisfil, Ontario, a rural community comprised of approximately 36,000 citizens. While out on an impromptu drive, Jason encountered a woman walking along the side of the road and, after offering her a lift, realized she was walking miles to get to her place of work due to the severely limited public transportation options. In his talk, he shares how his team took to the challenge of improving public transit options for the town, resulting in a successful public-private partnership with one of the largest rideshare players in the industry.

Read: Gov2020: Deloitte’s Look Into the Future of Government