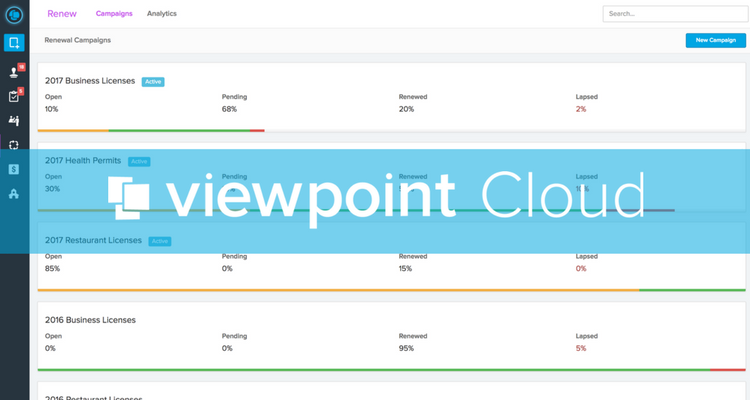 Renewing licenses can be a pain for applicants, but is often especially frustrating and tiring for department staff members. Listening to feedback from our customers, we heard common pain points like identifying licenses that are up for renewal, notifying applicants, and processing large influxes of renewals applications in a short time period.

Using what we learned, we designed ‘Campaign Renewals’, an all-new feature of our newest platform—ViewPoint Cloud3.

Imagine your office wants to renew all Alcohol Licenses expiring in December 2017. With a traditional renewals model, this might involve:

The end result: an overburdened staff, unhappy customers, and a lower than desirable rate of applicants actually renewing their licenses on time.

What if there were a better option? Something that made renewals a breeze, a cohesive part of every day operations.

Introducing Campaign Renewals. With this new tool, the same task of renewing Alcohol Licenses expiring in December 2017 might look something like this:

ViewPoint Cloud3 even features an at-at-glance visual indicator so you can easily monitor the progress of all campaign renewals simultaneously.

The end result: staff that can focus on higher priority tasks, happy customers who never have to leave home to receive their new license, and a higher rate of on-time renewals.

Our goal is to make technology that helps governments streamline operations and provide a user-friendly experience for both employees and the public. ViewPoint Cloud3’s new Campaign Renewals feature does both in one, turning the tangled mess of renewing licenses into an efficient, intuitive process for all parties.